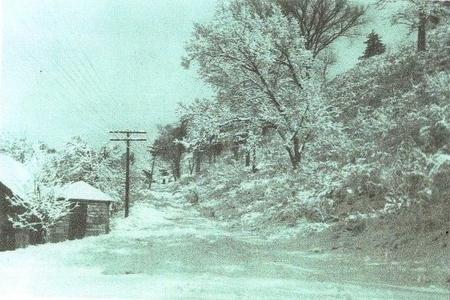 The above cabin was built between 1822 and 1830 and served as a steamboat stop.  Local residents would bring their apples, livestock and other produce to the cabin for shipment to St. Louis.  When the boat arrived, the goods would be loaded for shipment.  Payment for the goods would arrive on the return trip of the steamboat.

The most notable resident of the cabin was Colonel John Shaw, a frontiersman who acquired the cabin in about 1836. Daniel Boone and his son Nathan were friends of John Shaw and referred to him as an outstanding frontiersman. John Shaw's memoirs were published in the 1850's and are on the Wisconsin Historical Society website.  (Information came from present Cabin Owner)

In an article in the Alton Telegraph printed on Monday, March 22, 1999, states: "The Shaw home is a historic landmark and the deed to the land was signed by President Martin Van Buren on August 6, 1838

Hamburg was founded in the early 1800's by pioneers such as John Shaw who came over from Germany to plant corn, grow apples and start commercial fishing trades.

There is a rich history in our little Village and surrounding areas along the Mississippi River. Learn more by visiting the following page.​

Died July 12, 1867
A bluff top monument overlooks the village, indicating the burial of riverboat Captain Swarnes who wished to be buried upright to command a panoramic view of the river. 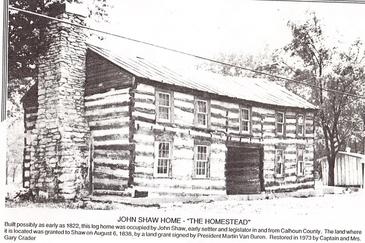 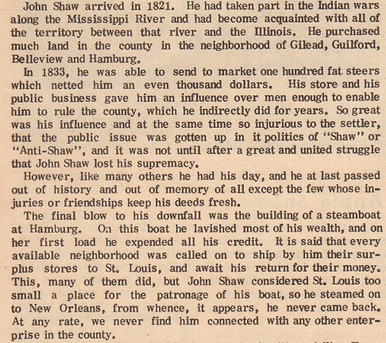 John Shaw article was published in the Calhoun Sesquicentennial Times July 4-5, 1975. The Story was titled: 150 years of History: In cooperation with the Calhoun News and Calhoun Herald

Old Hamburg Jail House - set at the corner of State St., north of the cut going up to the Cemetery.

(Rumor has it back in the day, they had a prisoner that would escape during the night and then show up back in the jail cell by the next morning.  The deputies couldn't figure out how he was getting out and then getting back in.  Finally after a couple days of this, they sat watch and seen that he was climbing in and out through the chimney)